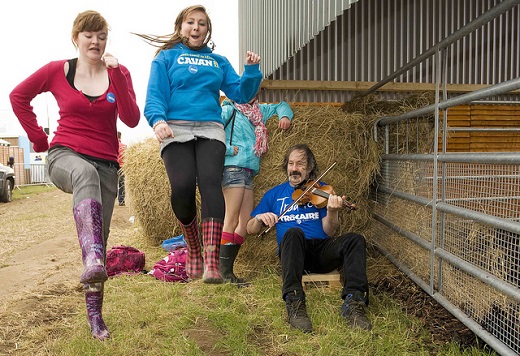 You know it when you hear it. “Hey, that’s an Irish tune!”
But what makes it an Irish fiddle song? The songs have a special quality to them that give them that recognizable Irish sound. What is it that makes this style unique?

Many of the same songs are played among different genres. For example, Irish, Bluegrass, and Old time fiddle players all play their version of “Whiskey Before Breakfast,” aka “God speed the Plow”, but how do we automatically know which one is the Irish version? The basic melody is the same through all styles.

Of course, you can get hints from the other instruments playing along, for instance, concertina and whistle are common in Irish music and practically unheard of in Bluegrass or Old Time. Guitars are played very differently in Irish music as opposed to American fiddle styles. But let’s focus on the FIDDLE.

Well, here’s the secret: it’s the ornamentation and bowing patterns (or LACK of bow patterns) that make a tune sound distinctly Irish.

One of the main ways that Irish fiddle sounds different is in the bowing patterns. The songs are typically upbeat and danceable. The bow often keeps a very quick and rhythmic tempo.

Although Celtic players do not refer to it by this name, the Georgia Shuffle is a bow pattern often used in Irish playing. The Nashville Shuffle also makes some guest appearances. But by and large, Irish music is dominated by an unpredictable combination of 2 and 3 note slurs interspersed by separate notes, and peppered with a bow ornament called trebles.

A slur is formed by playing 2 or more notes in one bow. Trebles, also known as “triplets” are an ornament, not a bow pattern, which uses 3 small quick bows in the place of a single note. It is usually done with a crunchy pressure creating a very percussive sound.

Learning these rhythmic bowing techniques is the key to capturing the essence of Irish music. This video illustrates some common bow patterns in Irish fiddle songs:

The second trait that makes Irish fiddle easy to spot is left-hand ornamentation. These are the techniques you can use to make simple notes sound different and unique. The common Irish ornaments include grace notes, triplets, cuts, and rolls. Here is an explanation of some of these terms.

Take our online fiddle lessons to begin learning how to use all these techniques and more. You will be sounding Irish in no time. This list shows just a hint of the bow pattern and ornamentation instruction you’ll get from the fiddle course: