How to Evaluate Your Current Teacher 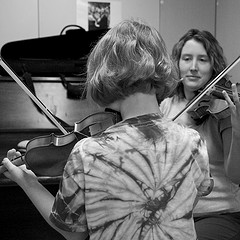 This is the second post in a series about choosing violin teachers. Read the first post, How to Choose a Violin Teacher, here.

If you have already been working with a teacher, ask them the questions from that post that you don’t already know the answers to. See what their score is, and then take the following into consideration. Again, 14 points possible. If your teacher scores a 10 or better, you’ve got a keeper!

____ Do they demonstrate what they are asking the student to do? Yes = 1 point
____ Do they explain things in a way you can understand? Yes = 1 point
____ Does your teacher keep trying to explain things until you understand, even if it takes a lot of time? Yes = 1 point
____ If you or your child still can’t do a new skill correctly on the third try, does the teacher tell you to practice it at home? Yes = MINUS 1 point If the teacher introduces a new skill at a lesson, but the student can’t get it, then the teacher needs to explain it in different ways until it makes sense. Obviously, a new skill won’t be perfect at first, but both student and teacher can tell when the student finally “grasps” something. If a teacher is giving up before this point, it’s not a good sign. (There are exceptions, of course.)
____ Is your teacher picky about playing in tune? Yes = 2 points (and more practice for you)
____ Did your teacher pay close attention to your posture, shoulder rest, and chin rest during your first few lessons? Yes = 1 point
____ Does your teacher nag you about your posture? Yes = 1 point (and 20 lashes for you)
____ Does your teacher nag you about your bow hand and left hand positioning? Yes = 1 point (and 40 lashes for you!)
____ Is your teacher consistent with follow up from the previous week’s instruction? Yes = 1 point
____ Does your teacher switch focus from week to week, working on wildly different things, even before previous assignments are completed? No = 2 points
Follow up and consistency are very important. If it was a good idea last week, then it should still be a good idea this week!
____ Is your lesson frequently interrupted by phone calls, children, or other things? No = 1 point
Many teachers teach from home, but the interruptions should be minimal. Life happens, but you know what is reasonable and what is excessive.
____ Did your teacher talk about TONE PRODUCTION or making nice sound even when you were learning your first few tunes? (stuff like bow weight, bow speed, and how close to the bridge you put the bow) Yes = 2 points