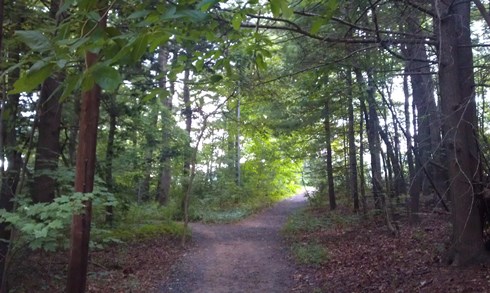 Some of you know that I’m gone this week. I’m at the Swannanoa Gathering, an intense music camp for folk musicians. It’s awesome, and I can’t wait to share with you what I’m learning! (Between me and you and these chickens, my fiddle course is going to ROCK! Even more than it already does!)

So, I’m in beautiful North Carolina, near Asheville, right up in the Appalachian Mountains!
The weather here is WET, rainy, muggy, and GORGEOUS.

Get it off me!

However, I forgot I’m in tick country, and did not remember you are supposed to avoid grass and walking under low hanging  foliage. (What do I know about low-hanging foliage…I live in the Red Desert! The rule there is watch out for rattlesnakes and don’t go walking in the dark by yourself after a few beers!)

Then in the middle of a big group gathering, I saw a tick on my arm. Trying to control my panic (I instantly recognized the little parasite for what it was), I tried to discreetly brush it off, but that bugger was holding on.

He immediately started pressing his ugly beak into my arm. THAT freaked me out, seeing him trying to get through my skin….so I brushed him more vigorously, in full internal panic…..he didn’t come off……so i lost it, and screamed, followed by “Get it off me!” (I might have been tapdancing at the time…there’s no way of knowing.)

Absolutely no one came to my aid. They sat and stared at me as if I was from another planet!

I try to blend and be discreet. I really REALLY try to just be a part of the background, but somehow or other, I ALWAYS seem to call attention to myself.

The next tick I found on my was also on my arm, and I managed to just flail my arms and brush hard enough that it came off. That was at a jam session, and I’m pretty sure people just thought I was feeling the music. (It was during a jig)

I’d come again, despite the tics

Well, the music here is ASTONISHING. The talent is mind-boggling. There are world-class musicians here, and some very awesome-sounding students, and professionals like myself. There is a wide mix of kindness and humility, and an annoying influx of ego and competition. C’est la vie.

Here’s a little observation for all y’all, and I think it’s true across the board: The BIGGER the talent, the bigger the heart. The more successful and famous a musician is, the KINDER they are. So, I guess if someone is insecure about themselves or their position in the pecking order, the louder they have to crow, or push someone else off their roost.

Some of the super-stars here are Martin Hayes (one of my teachers), Liz Carroll, John Doyle, Brian Conway, Liz Knowles, and Kimberley Fraser (another of my teachers)….and those are just the ones with whom I’m familiar…..there are zillions of other super-heroes here.

Well, two of my all-time heroes of fiddle are Martin Hayes and Liz Carroll….I mean…I sort of obsess about them, buy all their stuff, you know, dream of meeting them. But when it all comes down to it, I have a dread of meeting them. Because what do you say? Do you make small talk? Do you admit you are a fan? It’s best to just AVOID them entirely. (I know this because of the time I met Amy Ray of the Indigo Girls at one of their shows. Another of my heroes. Just kind of bumped into her in the hallway of the small venue. “Hi, I’m Amy,” she said. Was I brilliant, erudite, or urbane? No, dear reader. I said, “No shit,” and turned and ran like a frightened little lamb!)

The part in which my true colors show

So on Monday, the line for dinner was the longest it had ever been. I waited until the last second to go, hoping the line would die down…but it was still LONG. As I came down the hill, I could tell immediately that I was going to land in line RIGHT behind Liz Carroll. And the line would be about a 20 minute line.

NO WAY. I had my violin case on my back, there would be no hiding from her…she would spot me as a fiddler, and talk to me. So I slowed my pace and let a batch of little Girl Scouts go in front of me. They should provide a buffer and give me something to hide behind.

That bought me about 8 minutes until those little twerps cut in line! They ducked right in front of Liz Carroll when she was distracted by a phone call! I tell you….what are they teaching Girl Scouts these days!? (And their cookies are too expensive!)

So I’m back to sweating it, hoping her phone call will last forever. I could tell the phone call was ending, and started to try to think of something to say, but then I saw her wave to someone. Oh thank GOD. She’ll have a friend join her in line.

Oh crap. She’s waving to Martin Hayes….and telling him to come over. Major panic. Worse than the tick on my arm!

So they hug and tell each other hello, and I guess they ran out of things to say that quickly, because they BOTH instantaneously turned to me, the shrinking violet with a fiddle on her back.

And the best thing I could blurt out was, “Well, I don’t think you should have to wait in line for dinner at all! You should go right to the front of the line.”

Someone just shoot me, and put me out of this misery.

Martin moved on, he had to go be a fiddle god somewhere else.

Liz turned to me, and asked about me, my background, and we had a LOVELY conversation. What an amazing person and musician. (as is Martin, as it turns out…more on that later)

I also want everyone to know that she told me the NAME of her next ALBUM….but I’m sworn to secrecy. I told her I wanted to post it on Facebook, and she told me, “Don’t you dare!” But I can brag that I know a secret! It’s going to be amazing!!!

Case in point: world renowned musician, and she took the time to talk in line with lil’ ol’ me.

On Tuesday, we had a Red Desert recognition in my own version of mini-fame! A woman came up to me and said, “Are you that Red Desert girl?”

“I recognized you by your voice. I wasn’t sure it was you from looking at you, but your voice gave you away.”

What? That’s like the THIRD time a stranger has said that since I started Red Desert Violin!

So, that means that 1) I should have been a singer, or 2) I am loud and obnoxious and people hear me before they see me, or 3) I don’t have to bother with hair and makeup in my videos.

In today’s class with Martin Hayes, he spent a great deal of time emphasizing to the class the importance of singing and dancing to the tunes you are studying. I mean he really REALLY emphasized it, and of course he is totally right.

If the music doesn’t come from within you, you will never really be able to express it with your hands. Your hands are the engine and your fiddles are the resonating chamber, but the source of the music is within you. And all you have to do to play more lyrically and expressively and PERSONALLY, is to SING what you are going to play.

Pay attention to how you sing it, shape the phrase. And sometimes, we sing it to match our playing….so be careful that you aren’t singing in weird angular, non-musical ways that would imitate our technical problems on violin…..sing it how your VOICE wants to do it, how your heart wants to do it, not your fiddle technique. (And there are more “right” ways than one to do it.)

So that was a really cool class.

Put it in a Candy Wrapper

Oh, funny observation: There are lots of LUCKY kids here. I like to listen in on their conversations, because it never disappoints! I’ve heard many classical kids just giddy as anything to be here, playing something FUN for a change. “Augh…all my violin teacher wants me to do is the most boring exercises…it is so miserable…..here I can finally have FUN.”

Then I heard a kid whose parents were Celtic music fans, “Ugh….I HATE Irish music….I get dragged around all year long to these things!”

Then another chimed in, “I used to hate it too….until I learned to play it well. Now I can’t stop!”

So, little lesson there for parents….it’s all about how you frame something…..is it a job, or is it a privilege? I know: easier said than done, but there are very subtle things you can do to change the reference point your kids have, to hopefully steer them into a more favorable opinion of their music.

Perhaps it also means that all students need to have 2 sides of the coin: Heads and Tales. Heads is our primary pursuit, possibly something that requires more discipline. Tales is the free spirited, non-judgmental part of music….for pure fun and enjoyment…..because in the end, they are both sides of the same coin.

Stay tuned for tomorrow’s update, in which you get an inside view of a scrumtrillescent jam session!